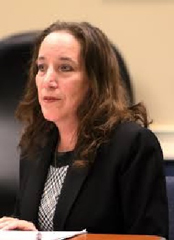 Anne Marrin is an alumni of NIU and graduated with a bachelor’s degree in Political Science/Public Law. She returned later in 2005 to earn a Master’s Degree in in Public Administration.

Anne has worked for over 16 years in government serving as an elected official as well as in administration. She served as a trustee for the Village of McCullom Lake for 7-years and served on the Planning commission, Police Commission and Economic Development Committee.

While obtaining her MPA degree, Anne interned at the Village of Buffalo Grove and worked for WRB LLC with Bill Balling where she consulted on various projects. One of these projects was for the City of Highwood and assisting them to obtain ILCMA accreditation as a City Administrator form of government. This was accomplished in 2008 and Anne was asked to stay on as Assistant City Administrator.